It’s taken a couple of years since my last successful Kickstarter to find another Kickstarter worthy idea.

I also put up a “quick and dirty” support site at 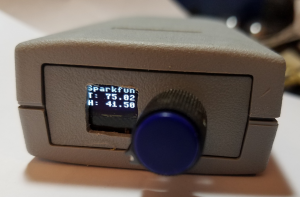 Now, 2 years later, we are doing a second production run of the Pi Platter because it continues to sell consistently, and we have a few regular customers.

Mind you, the Pi Platter was never intended to be  a “home run,” but rather just a base hit so I could fully appreciate how crowd funding works.   Indeed, I learned a lot that will help me on this next “reboot.”

As of this writing, I am still refining the target market.   What is clear is that there is a market for a nice case, with a nice user interface and associated code. 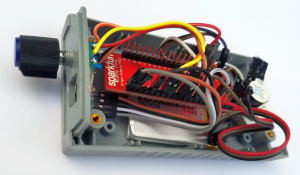 One of the things that made the last Kickstarter successful was we had some good examples about how to use our offering – namely the Pi Platter.

For most makers, a polished physical packaging is an afterthought – and often never gets done.  This has certainly been the case for me.   The user interface consists of a 64×64 oLED display and a rotary encoder with a built in push button switch.  So far, I wrote out  micropython script to make a temperature/humidity alarm  with adjustable set point.  The real time interrupts of the rotary encoder where a bit tricky and not surprisingly, micropython was a bit slow on an ESP32.   I was curious how well micropython worked, but now that I’ve seen the result, I will redo the code in C.  The case is large enough for any number of ESP32, ESP8266 and Arduino boards, including a LiPo battery and charge controller or boost converter.   Even a Raspberry Pi Zero will fit.

A couple of candidate niches to sell my new case/UI design to  small farm/homestead and the biohackers. I will likely create more than one Kickstarter to cover all the possibilities.